Renovate108 is a project documenting the renovation of what began as a pretty average Southern California tract home, located in Thousand Oaks, California. Hopefully, one day, it will become something beyond average. It is an exercise in what would happen if we remove the damper on our ideas about what’s possible to create between two people of modest means, and instead just go for it. In the process of sharing, we hope we can also inspire others to see ways they can make the best of their “average” homes too! We take DIY to the next level, and do not shy away from doing a little more work to go for higher impact. For more about our house, see the post meet our house.

Jessica & Tyler met as video game testers in Calabasas in Fall 2004, right after finishing college. It was not quite love at first sight (in fact, the first thing Jess said to Ty was “you know, you don’t have to dress like that to work here“, after giving his pleated pants the side eye in the elevator on the day he interviewed). However, after being stuck in the same small suite into which they shoved 8 sweaty video game testers for a few months, Tyler realized that he would marry Jessica as she plugged in her Nintendo GameCube to her TV one day. He just needed to find the courage to start talking to her…

They first bonded over how each of their dad’s had a book called “the way things work” which they loved to pour over, and mutual love of legos and video games when they were kids (and being the only kid out of all of their siblings to really love those things).

Five years, a prophetic dream, and a quarter-life crisis later, they were married and living in Sherman Oaks in their cute courtyard apartment. A recession kept them and their two children in the apartment until they had saved enough pennies for a small down payment, and they bought their first home in Thousand Oaks in summer 2015.

Tyler is the engineer to Jessica’s designer; Jessica will dream up a design, and Tyler will engineer the details of the construction. At first, their working relationship was terrible, but over time they have developed a great working rapport that has led to outcomes better than either could achieve if working separately.

*fun fact! Tyler and Jessica were born in the same year in the same hospital in the valley, and so were their mothers (but in Santa Monica)!

Jessica was raised in Los Angeles’ San Fernando Valley (Van Nuys/Sherman Oaks), studied fine arts and visual anthropology at USC, and her primary professional background is as a graphic designer is in the corporate apparel industry. She blogged for many years over at Visual Vocabularie, before deciding to start the @renovate108 instagram account and subsequently this website. She has been a freelance graphic designer since the recession, and has been transitioning into interiors for the last few years.

She grew up with her parents always working on their house, visiting her dad (a tile foreman) at jobsites, and fell in love with the idea making a house a home at a very early age. She has been collecting details that would grace her future home since the primary grades, and has spent these last years implementing many of those ideas!

Tyler’s family is also from the San Fernando Valley and surrounding areas. He’s been programming since 1996. He spent 10 years in Idaho with his parents and siblings before moving back to California in 2004. He’s worked at media companies and start-ups, and currently works at Lamps Plus Corp as a Front-end Software architect. He is responsible for making Jessica’s pretty photographs look extra pretty on this website. He also likes to build apps in his limited spare time.

Tyler loved building homes (and spaceships!) out of legos when he was a kid, and spent a good amount of time drawing plans and layouts of his dream home on grid paper when he was a teen. He loved to draw plans of homes with step-down living rooms, and the fact that this house has a step down living room was a big influence in why he wanted this home! 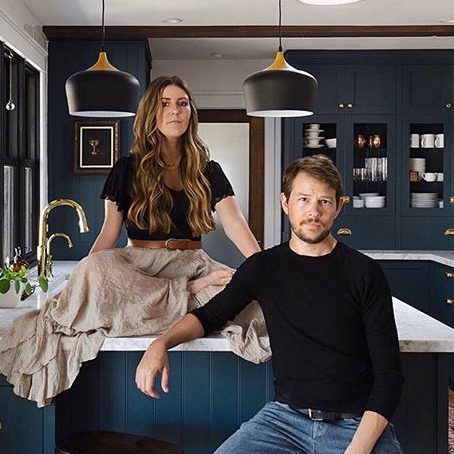 Follow along as a graphic designer and a software architect turn their ordinary suburban LA 1500 square foot tract home into something extraordinary.